Archaeological excavations at the ancient Zeugma started in the late 1980s, although it was already known in the early twentieth century by locals and by some visiting Europeans that at the site some Roman mosaics and inscriptions were discovered. By the 1960s, some locals discovered the monetary value of the mosaics, and they have been involved in illegal excavations for the international market. Archaeologists who began excavation at Zeugma have reported that many of the mosaics found in Zeugma had been damaged by such illegal excavations. Archeologists are suspicious that many of the Roman mosaics in various museum catalogues, whose place of origin is described as “East Mediterranean,” or “said to be from East Turkey,” or “near Syria,” may probably be excavated from Zeugma. One notable example of the damage of this illegal activity is the mosaic of Dionysus and Ariadne. In 1992, a local guard for Zeugma discovered a tunnel, which led to the remains of a Roman villa. Archaeologists based at the Gaziantep Museum excavated the site and uncovered a mosaic depicting the wedding of Dionysus and Ariadne. They decided to preserve it in situ. However, a large part of this mosaic was cut out by looters on 15 June 1998 , and has been missing since then. Gaziantep Museum exhibits this mosaic as it is to raise the awareness against looting and illegal trafficking of artifacts. 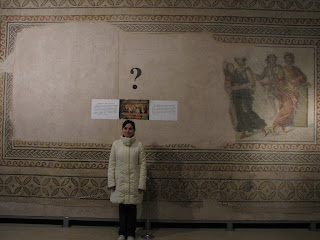 A Short Documentary on Zeugma

This short documentary film entitled "Zeugma, A Roman Town in Anatolia" created by the Turkish State Television. The video takes you through the history of Zeugma with an informative narration, commentary from researchers and all-too-brief views of the mosaics. Although the video is dated and the image quality is not great, this 6 minutes documentary is somehow entertaining with its Roman times depictions!
http://video.google.com/videoplay?docid=8323657299167199011#
Posted by senem at 9:50 PM 12 comments:

For some viewers the haunting look of the Gypsy Girl mosaic resembles the famous Afghan Girl. Steve McCurry made the picture of the Afghan girl in 1983. No doubt, this is one of the most memorable images in National Geographic's history. An iconic emotion in the eyes of these two women, from then and now, make me feel blue. What do you think?

Poseidon, chief of the water deities and second in power only to Zeus, carried a trident, with which he could shake the earth, call forth or dissipate storms, and the like. To impress Demeter, who urged him to create the world's most beautiful animal, Poseidon invented the horse. Horses with brass hoofs and golden manes drew his chariot across the seas, which became calm before him.Homer claims Oceanus and Tethys, pictured in the lower half of this mosaic, were responsible for the birth of the gods, but Hesiod's version of the origins is generally accepted. Gods of the sea, Oceanus and his wife Tethys bore 3,000 daughters and 3,000 sons. Known as the Oceanids, these children were spirits of rivers, waters, and springs. 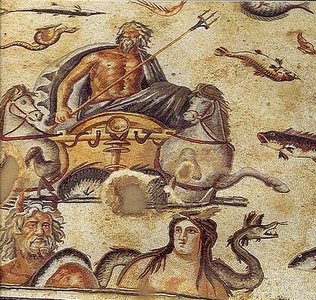 Demeter:
"I begin to sing about the holy goddess, Demeter of the beautiful hair, about her and her daughter, Persephone of the lovely ankles, whom Hades snatched away; loud-thundering Zeus, who sees all, gave her to him." So writes the anonymous author of the ancient Homeric Hymn to Demeter. The goddess of agriculture, Demeter here wears a crown of flowers and ears of wheat. Inside the outer circle that frames her are eight axe blades. The eight blades are thought to represent Persephone, whom Zeus decreed must spend eight months of the year with her mother and the other four months with Hades, her husband and god of the underworld. 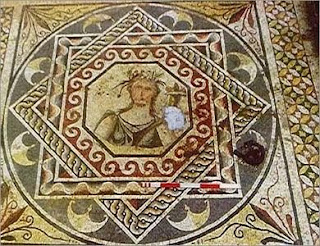 Achelous:
Achelous, the horned king of Euphrates and the oldest of the male Oceanids, once wrestled with Heracles, the greatest of Greek heroes, over a woman both desired for a bride. "They came together..." wrote the 5th-century B.C. Greek dramatist Sophocles in his play The Women of Trachis. "Then was there confusion of sounds—the beating of fists, the twang of bow, the clash of bull's horns; there were the wrestling holds, the painful collision of heads, and the groans of both." In the struggle, during which Achelous transformed himself into a bull, Heracles broke off one of Achelous's horns (shown here on top of his forehead). But later a victorious Heracles returned the horn to him. In exchange, Achelous gave Heracles the miraculous horn of Amalthea, which provided its owner with all the food and drink he could want. This was the cornu copiae, or horn of plenty. 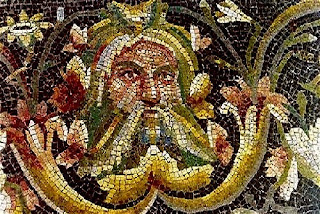 Achilles:
When Helen, the beautiful wife of Menelaus, king of Sparta, was kidnapped to Troy, Menelaus called upon his fellow chieftains to help him recover his wife. One of them was the great warrior Achilles. Achilles's mother, the immortal sea-nymph Thetis, knowing that her son's fate was to perish at Troy if he went, dispatched him to the court of King Lycomedes. There, at her urging, he disguised himself as a maiden and joined the king's daughters. Odysseus, learning that Achilles was at the palace, appeared before the women as a merchant, offering items for sale, including weaponry. While the daughters naturally gravitated towards the feminine objects, Achilles, as this mosaic depicts, couldn't resist the arms. Thereby unmasked, Achilles quickly agreed to accompany Odysseus to Troy, where Achilles was eventually killed by a poisoned arrow that struck him in the heel. It was his one weak spot: When he was a baby, his mother Thetis dipped him in the River Styx, which made him invulnerable except where she held him at the heel. 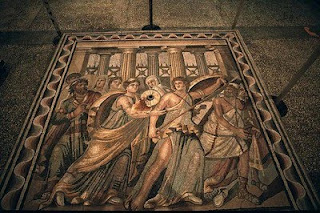 Gypsy Girl:
Scholars have suggested that the Gypsy Girl, named for the wild look in her eyes, might be Gaea, goddess of the Earth. Hesiod, the 8th-century B.C. Greek poet, whose account of how the gods came into existence is considered the classic version, says that in the beginning there was Chaos, which in Greek means "yawning." Into that yawning, or void, came Gaea (Earth), Tartarus (the lowest region of the underworld), Eros (Love), Erebus (the personification of Tartarus) and Night. With Uranus, god of the sky, Gaea gave birth to the Titans, 12 gods that included Oceanus and Tethys. 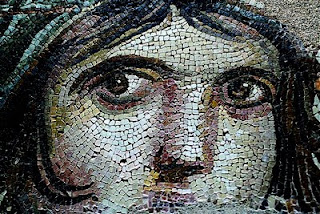 The archaeological legacy of Zeugma, home to some of the world’s most valuable mosaics, will soon have a new home following the completion of a multi-million dollar mosaic museum in Gaziantep. The new museum designed to preserve the archaeological treasures of Zeugma is located near the ruins of the site. The Zeugma Mosaic Museum would be the largest museum of its type in the world. The museum will also house artifacts from Turkey’s neighbors and expected to have a positive effect on the surrounding region. Currently, 550 square meters of Zeugma mosaics are on exhibit in Gaziantep Museum. With the newly launched Mosaic Museum, 2000 square meters of mosaics, as well as archeological artifacts from Zeugma will be exhibited. The project cost 30 million dollars. The museum is expected to be launched in 2011. A few architectural visual from the Zeugma Mosaic Museum Project: 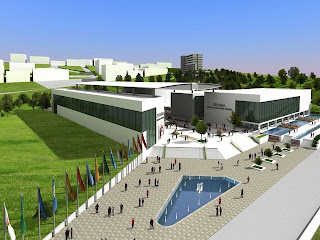 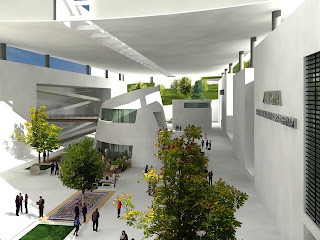 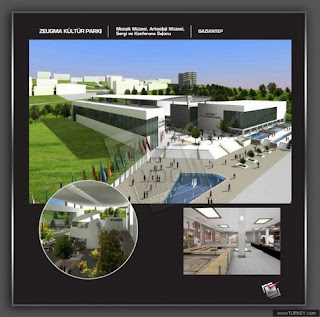 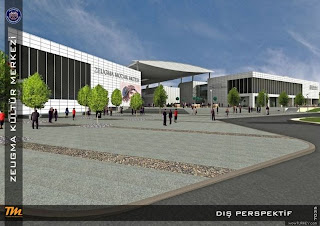 Zeugma, which was founded in the 3rd-4th century B.C. by Seleucus Nicator I, one of Alexander the Great’s commanding generals, is situated at one of the easiest fording places on the Euphrates. Maybe therefore its name, ‘Zeugma’, means ‘bridgehead’ or ‘crossing place’. Thanks to its strategic situation on an east-west axis,the city quickly grew and developed, becoming one of the four major cities of the Commagene Kingdom founded in the 1st century B.C. in the post-Hellenistic period. When the region came under Roman hegemony, one of the empire’s thirty legions was stationed here, the 4th Scythian. Its presence fuelled trade, trade in turn brought wealth, and when that wealth attracted artists, Zeugma became a metropolis of 70 thousand people. On the banks of the Euphrates merchants built villas with a perfect view of the sunset. And in the courtyards of those villas they added refreshing, mosaic-paved pools. With their mosaics depicting Poseidon, Oceanus, Tethys and the river gods, these villas on the banks of the Euphrates transformed Zeugma into a virtual fine arts museum. Swelling shortly to twice the size of London and three times that of Pompeii, the city rivalled the Athens of its day. Though archaeological research in Zeugma goes back to the 1970s, most of what is known from the site was discovered during the extensive salvage excavations in 2000. Before large portions of it disappeared in 2000 beneath the rising waters of a several dam constructions on the Euphrates River, the ancient city of Zeugma yielded one of the richest troves of Roman mosaics ever uncovered. Now exhibited at Gaziantep Museum in downtown Gaziantep, the well-preserved mosaics depict a wide variety of mythological scenes and individuals. Those mosaics soon to be moved to a newly built Zeugma Mosaics Museum, constructed close to the ancient Zeugma and which will be the world's largest mosaic museum. This blog is dedicated to inform its readers on this new Zeugma Mosaic Museum and its rich collections. 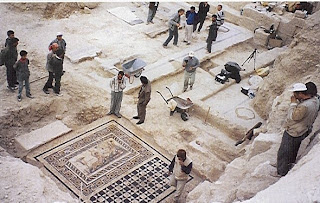 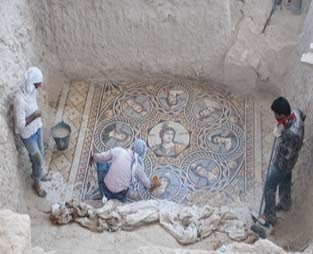 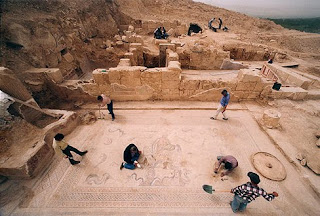